Hi! You've found the place where I leave tutorial-style notes for various projects and rant about broken computers and how they fail.

Packet radio has been around since the 70s, and is used extensively by radio amateurs. APRS (Automatic Packet Reporting System) allows amateurs to send real-time beacons which may include location or other types of information.

Alongside stations, the APRS infrastructure includes digipeaters and IGates. APRS packets may be picked up by local digipeaters (repeaters of digital packets), and then repeated to reach further stations. An IGate relays received packets to the Internet where a unified map of all APRS objects can be displayed.

I’ve tried to do APRS packet radio over the past several days with mixed results. Here is what I found.

The standard APRS frequency for sending messages is 144.800 MHz in Europe, in the 2 metre band. Any 2M radio that can receive and decode APRS messages will work. It’s the most fun using a handheld device and receive messages as you walk through a new area. Unfortunately, handheld radios that have a built-in TNC are very expensive - but there is an alternative. If all you have is a cheap 2M radio, it can be used with a compact bluetooth TNC device and an APRS application on your phone for the same capabilities.

If doing this stationary, there are more alternatives - as the TNC bit can be done in software, with applications such as Direwolf, and all you require is a sound card and any radio.

I’ve used an Yaesu VX-8DE, which is a handheld device with a built-in TNC.

It’s harder than you think.

When travelling by trains, I was only able to send packets for maybe 1⁄5 of the total journey time, due to not having GPS coordinates to build packets with. Turns out that the inside of a train is NOT the best environment for acquiring a GPS lock.

Even with the GPS fired up and sending a beacon every minute, only about 10% of all the packets sent were picked up by any digipeater. Turns out the inside of a train is NOT the best environment for RF propagation either. I was digipeated once approaching Leipzig, as the train was stopping:

Trains are still amazing despite this slight glitch. And using a bluetooth TNC should eliminate the GPS problem, as phones are generally better at acquiring GPS data (they can use a broader range of satellites than the proprietary Yaesu GPS antenna for one).

There can be too many APRS packets.

For example, Cambridge is very active APRS-wise. There were many stations around, some even within direct messaging distance. However, trying to send a single APRS message took several attempts due to collisions. Timing the message so that it sends between the regular beacons of other users helps, but rarely first try, and spamming messages to get something through only makes the problem worse in a crowded spectrum.

As good practice for those out there thinking of running stationary or unattended beacons I recommend sending updates at least three minutes apart.

Several satellites have amateur radio capabilities, and there are apps to easily track satellite passes in your location.

Cambridge is also in a great spot for ISS passes, some with really a nice elevation above the horizon. The ISS has a digipeater on board. This extends the limited local 2M perspective to space and back anywhere on the continent. I spent too much time in muddy fields trying to get digipeated by the ISS, but with no success. However, I did receive stations from Austria (OE6PWE), Sweden (SM3XLY), Italy (IK1COA), Netherlands (PE1NTN), France (F6FUJ), Germany (DB1DT), Russia (UA1WBM) and Space itself (RS0ISS): 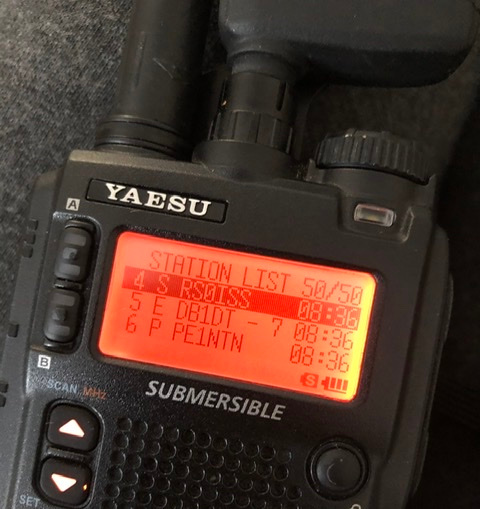 Sending failed possibly due to a combination of the bad rubber duck antenna of my handheld, sky conditions, maybe competing with other stations.

On my to-do list is to build a Yagi, and try again, as per this nice start-up guide.